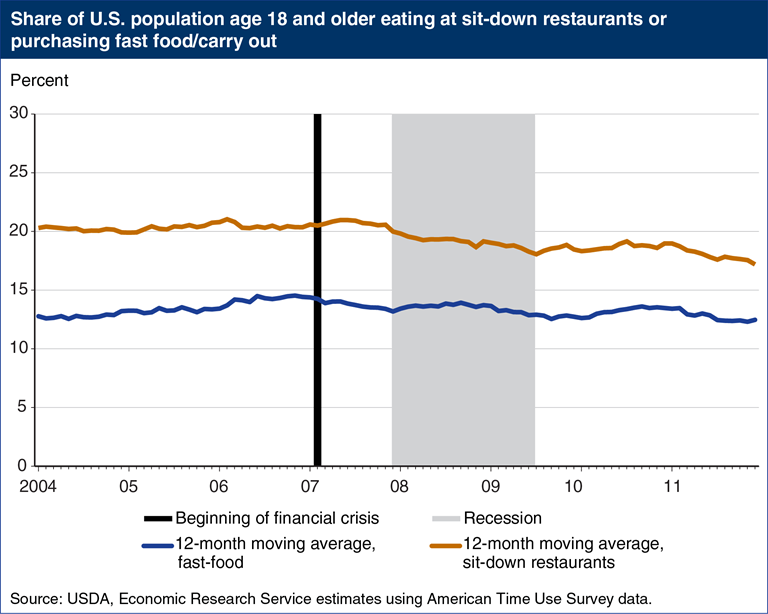 Economic recovery since the Great Recession—which officially ran from December 2007 to June 2009—was slow, particularly for the labor market; the 8.7 million jobs lost during the recession were not recovered until May 2014. Tough economic times caused consumers to adjust their spending on discretionary items, including their eating out habits. Using American Time Use Survey (ATUS) diaries from 2003-11, ERS researchers found that visits to sit-down restaurants declined during and after the 2007-09 recession, while fast food visits were little changed. The share of adults purchasing fast food/carry out at a counter-service restaurant on a given day stayed fairly constant over 2007-11 at around 13 percent. In contrast, the share of adults visiting a sit-down restaurant once or more on an average day declined from 20 percent in 2006 to 17 percent in 2011. The drop in sit-down restaurant visits likely reflects people switching their eating out purchases to lower-cost fast food options and the expansion of fast food offerings—both menu items and restaurant formats, such as “fast casual” restaurants. This chart is from “Recession Had Greater Impact on Visits to Sit-Down Restaurants than Fast Food Places” in the March 2015 issue of ERS’s Amber Waves magazine.