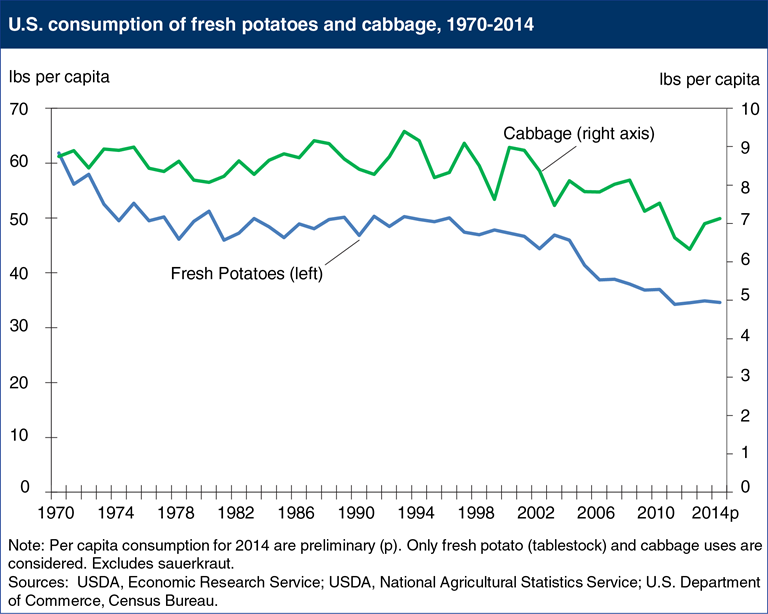 Many consumers will celebrate St. Patrick’s Day by preparing a traditional Irish-themed meal of corned beef, cabbage, and potatoes. While cabbage and potatoes remain seasonally popular, annual per capita consumption is trending lower. Beginning in the1970s and through the 1990s, consumption of fresh cabbage averaged about 8.5 pounds per capita, peaking at 9.3 pounds in 1993 with the growing availability of prepared, fresh-cut products such as slaws and salad mixes. Consumption has been trending lower since 2000, reaching as low as 6.3 pounds in 2012 before rebounding somewhat the past two years to 7.0 pounds in 2014. Consumption of fresh potatoes has been declining over a longer period, falling by about 20% during the 1970’s, before stabilizing during the 1980s and 1990s and trending lower again since 2000. The long-term decline reflects changes in the market as well as dietary shifts, including greater availability of processed potatoes (especially frozen) that supplant consumption of fresh potatoes, and growing interest in low-carbohydrate diets during the past decade that reduced consumption of all starches. This chart is based on data found in the Vegetable and Pulses Yearbook and the Food Availability Per Capita Data System.