Russian grain production and exports are rising in tandem 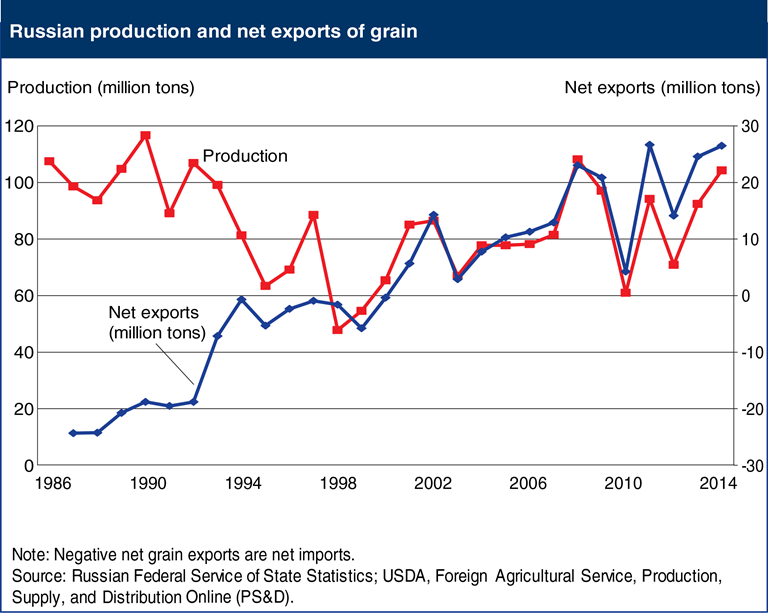 During the final decades of the Soviet Union, Russia (along with the USSR in general) was a large importer of grain, with net imports in some years exceeding 20 million metric tons (mmt). However, since 2000, the country has become a major grain exporter (primarily of wheat), with net exports in some years exceeding 20 mmt. Underlying this reversal is the fact that the Russian livestock sector contracted substantially—by about half—during the 1990s, reducing not only the need for grain imports, but for domestic production, as well. Then, beginning in about 2000, Russian grain production began to rise substantially, creating large surpluses for export. Despite the country’s move from large grain importer to exporter, average annual grain output over 2011-14 was still below that of 1986-90. This highlights the degree to which the Soviet Union over-invested in its high-cost and inefficient livestock sector, which required large volumes of feed from both domestic and imported grain. Russian grain output and exports continue to trend higher, but can fluctuate considerably on a year-to-year basis because of Russia’s volatile continental weather. This chart is based on the report, Rising Grain Exports by the Former Soviet Union Region, Causes and Outlook.