China continues to import rice at a record pace 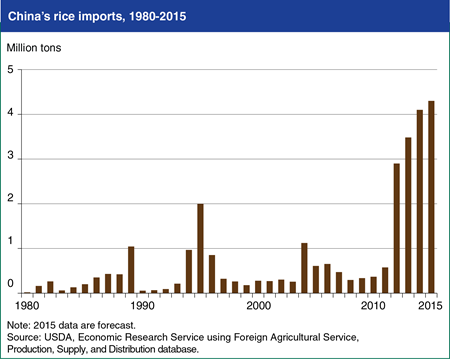 Rice imports by China are expected to set a new record in 2015, surpassing 2014 levels by 200,000 metric tons and marking the fourth consecutive year of record imports. Rice imports surged in 2012 to more than 7 times the average of the previous 5 years, and continued to grow each year thereafter. China remains the world’s largest rice producer and consumer, and has been largely self-sufficient in rice for more than 30 years and until recently, was typically a net rice exporter. In 2012, China surpassed Nigeria to become the world’s largest rice importer. Vietnam and Burma are the largest suppliers of rice to China, along with Pakistan and Thailand. The United States is currently unable to ship rice to China due to ongoing disagreements over phytosanitary issues. China’s record imports are not due to a short crop or tight supplies, but are the result of much lower prices for imported rice than for domestic rice, and continued growth in use partly due to an increasing population. As the world’s largest rice consumer, even small dietary shifts can have a large effect on the supplies needed to meet consumer demand, and China is increasingly turning to the world market to feed its appetite not only for staple commodities such as rice, but also fruits, vegetables, meat and other consumer-oriented products. This chart is based on the February 2015 Rice Outlook report.