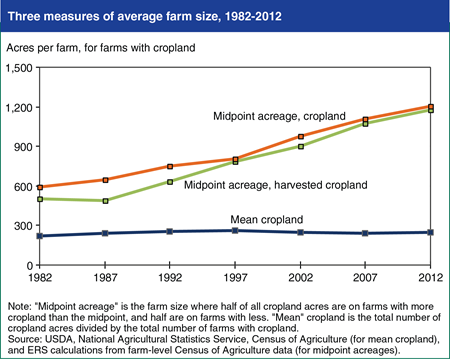 The average (mean) number of acres on crop farms has changed little over 3 decades, with a slight increase from 241 acres in 2007 to 251 in 2012. However, the mean misses an important element of changing farm structure; it has remained stable because while the number of mid-size crop farms has declined over several decades, farm numbers at the extremes (large and small) have grown. With only modest changes in total cropland and the total number of crop farms, the size of the average (mean) farm has changed little. However, commercial crop farms, which account for most U.S. cropland, have gotten larger, aided by technologies that allow a single farmer or farm family to farm more acres. The midpoint acreage (at which half of all cropland acres are on farms with more cropland than the midpoint, and half are on farms with less) effectively tracks cropland consolidation over time. The midpoint acreage of total and harvested cropland has increased over the last three decades, from roughly 500-600 acres in 1982 to about 1,200 acres in the most recent census of agriculture data (2012). This chart is extended through 2012 from one found in the ERS report, Farm Size and the Organization of U.S. Crop Farming, ERR-152, August 2013.