Americans consumed 19 pounds of eggs per person in 2012 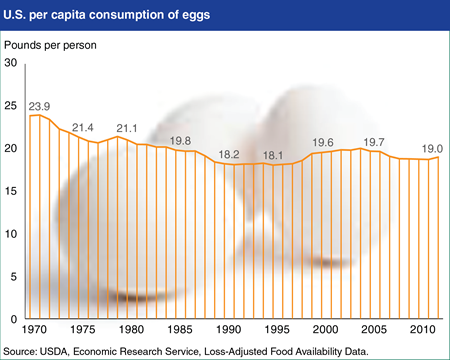 According to ERS’s Loss-Adjusted Food Availability data, U.S. consumption of eggs fell during the 1970s and 1980s from 24 pounds per person in 1971 to 18.2 pounds in 1990. Egg consumption stayed fairly flat before rising some in the late 1990s. Concerns over cholesterol in eggs (related to heart disease), and an increase in fast food restaurants offering non-egg breakfast items such as yogurt, fruit salads, oatmeal, etc., likely influenced the decline. Roughly 70 percent of the 19 pounds of eggs per person (the equivalent of 144 eggs) that Americans consumed in 2012 were shell eggs, and 30 percent were processed egg products, where eggs have been removed from the shell, pasteurized, and then packaged in liquid, frozen, or dried form. Though some processed products are available in grocery stores, many processed egg products are used by food manufacturing and foodservice companies. On a daily basis, Americans consumed an average of 0.8 ounces of eggs per day in 2012, compared to 2.0 ounces of chicken, the most consumed protein in the meat, fish, eggs, and nuts group. In 2012, Americans consumed 529 daily calories per person from the meat, fish, eggs, and nuts group, with 34 calories coming from egg consumption. The data for this chart come from ERS’s Food Availability (Per Capita) Data System.