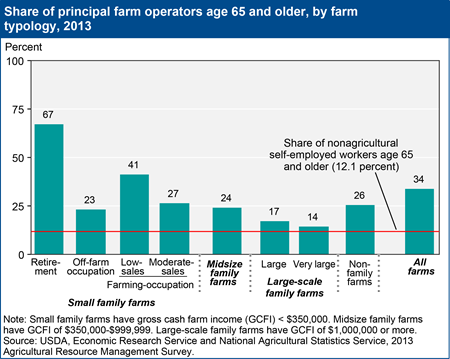 In 2013, roughly 34 percent of all U.S. principal farm operators were at least 65 years old, nearly 3 times the U.S. average share of older nonagricultural self-employed workers. Retirement farms had the highest percentage of older operators (67 percent)—as might be expected—followed by low-sales farms (41 percent). The advanced age of farm operators is understandable, given that the farm is the home for most farmers, and farmers can gradually phase out of farming over a decade or more. Improved health and advances in farm equipment also allow operators to farm later in life than in past generations. Principal operators of more commercially oriented farms—large farms with gross cash farm income (GCFI) of a million dollars or more—more closely resembled the nonagricultural self-employed workforce, with 14-17 percent age 65 and over. This chart updates one found in the ERS report brochure, America’s Diverse Family Farms, EIB-133, December 2014.