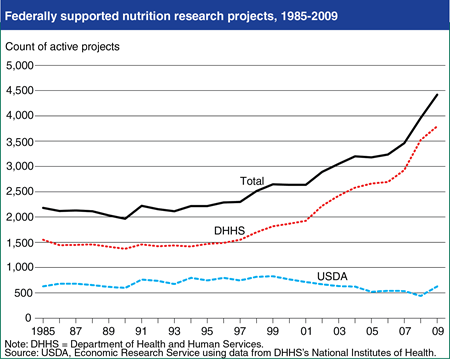 USDA and the Department of Health and Human Services (DHHS) are the lead Federal agencies in conducting and funding human nutrition research designed to help ensure a healthy citizenry. A recent ERS analysis of data maintained by DHHS’s National Institutes of Health shows that Federal investments in nutrition research more than doubled in real (inflation-adjusted) terms from 1985 to 2009. All of this growth is due to increased DHHS funding, especially between 1999 and 2003. The number of Federally supported nutrition research projects has similarly grown from 2,178 in 1985 to 4,419 in 2009, with a larger share of support in recent years directed toward studies of the relationship between nutrition and obesity. From 1999 to 2009, the number of DHHS supported projects grew 7.4 percent annually, while USDA supported projects fell by 2.8 percent annually. In 2009, DHHS funded 86 percent of Federal nutrition research projects, and USDA funded 14 percent. This chart appears in the ERS report, Improving Health through Nutrition Research: An Overview of the U.S. Nutrition Research System, released on January 26, 2015.