Many rural counties continued to lose jobs in 2014 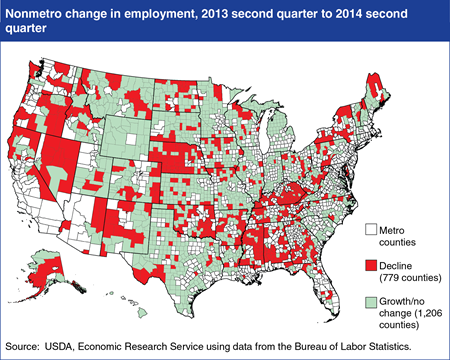 While the U.S. economy is now in its 6th year of recovery from the Great Recession of 2007-09, many rural areas have struggled to recover the jobs lost during the downturn. While urban employment now exceeds pre-recession levels, rural employment remains well below its 2007 peak and has continued to fall over the last year in many areas. Notable clusters of employment decline can be found in the Deep South, Appalachia, the Mountain West, and the Pacific Northwest. Employment in rural America as a whole is less than 2 percent above the employment trough reached during the recession, and rose less than 1 percent between mid-2013 and mid-2014. One example of employment growth, however, was seen in the Northern Plains, where new jobs have been generated by rising energy extraction. Rural counties that are adjacent to metro areas have also experienced faster-than-average job growth since 2009, after having suffered larger-than-average job losses during the 2007-09 recession. This map is found in the 2014 edition of Rural America at a Glance, EB-26, November 2014.