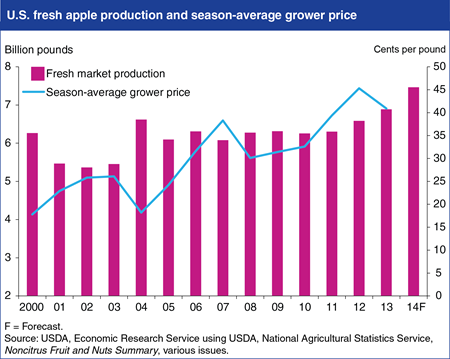 Despite harsh winter conditions in parts of the country, total U.S. apple production is forecast to rise 4 percent to 10.9 billion pounds in 2014, the third largest crop since 1990. Abundant supplies are expected to move into the fresh apple market and place downward pressure on U.S. fresh apple prices. Production in western States is expected to be up 13 percent, more than offsetting weather-reduced output in central and eastern States, including Michigan and New York. Washington’s 2014 apple crop is forecast to be 14 percent larger than in 2013, bringing in larger than normal supplies of apples for fresh use during the 2014/15 marketing season (August-July). Overall, about 7.5 billion pounds of production are forecast for fresh use, increasing fresh market supplies 8 percent from 2013 and 15 percent above the previous 5-year average. Early-season grower prices have weakened relative to recent years; the August 2014 average price of $0.375 per pound is 15 percent below the 2008-2012 average August (USDA did not report apple prices for August 2013). Find this chart and additional analysis in Fruit and Tree Nut Outlook: September 2014.