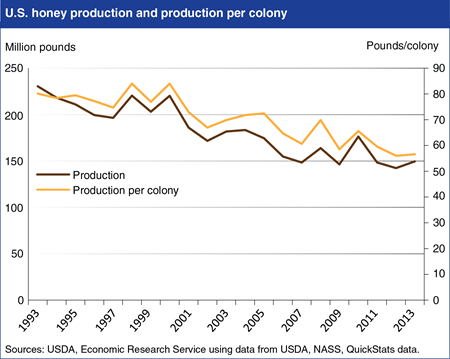 In 2013, U.S. beekeepers produced 149.5 million pounds of honey, down about 35 percent from levels produced 20 years earlier. Over the same period, per-colony honey production also declined from 80.2 pounds in 1993 to a record low 56 pounds in 2012. Declining production has occurred despite rising prices; the average farm-gate price of honey increased 98 percent from $1.01 per pound in 2006 to $1.99 per pound in 2012. The causes of falling per-colony honey output are uncertain, but likely include a combination of factors. The relatively recent onset of multiple honey bee health challenges may be weakening colony strength (measured in numbers of adult bees) and productivity. Also, the value and quantity of honey produced by foraging bees is affected by the crops from which bees gather nectar. A higher percentage of colonies are now being used to pollinate almond orchards instead of crops that are more productive for commercial honey production, potentially lowering the average volume of useable honey per colony. Other factors may include the effect of prolonged dry weather in some U.S. regions on forage availability, and a drop in summer foraging area in the Northern Plains and Upper Midwest because of declining acreage enrolled in USDA’s Conservation Reserve Program and expanding area planted to corn and soybeans. Find these data and additional analysis in Sugar and Sweeteners Outlook: October 2014.