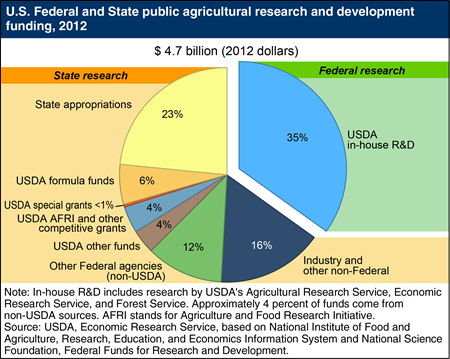 In 2012, U.S. public sector agricultural research and development (R&D) investment totaled about $4.7 billion. After adjusting for inflation, this represents a decline of nearly 25 percent since the mid-2000s. Expenditures for State Agricultural Experiment Stations and other State-based cooperating institutions accounted for a little under two-thirds of all public agricultural R&D, while USDA agencies accounted for the remaining third. Internal funding sources account for almost all of USDA’s in-house R&D expenditures while State institutions rely on a variety of funding sources. USDA-administered funding to States was about $660 million in 2012. Of this, there were two notable funding streams: $284 million in “formula funds,” and $189 million in competitive grants for the Agriculture and Food Research Initiative. In 2012, State appropriations provided $1.1 billion in State R&D funds, while non-USDA Federal agencies provided about $550 million, and private industry, product sales, and other non-Federal sources provided about $750 million. This chart updates one found in the Amber Waves finding, "Sources of Public Agricultural R&D Changing," June 2007.