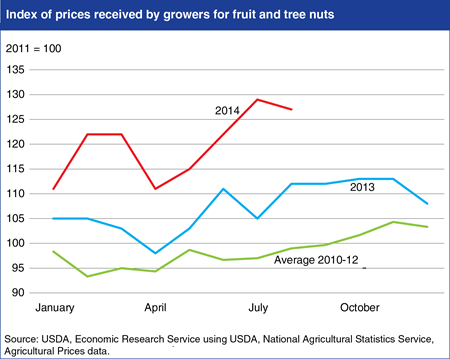 The index of prices received by U.S. fruit and tree nut growers has remained consistently above year-ago levels and 2010-12 average levels during 2014. The August grower price index for fruit and tree nuts was up 13 percent from a year earlier and 28 percent above the 2010-12 average. Late 2013 freezes in California and citrus greening issues in Florida have affected U.S. citrus crops and bolstered prices for most citrus fruit in 2014, with U.S. fresh orange prices reaching highs not seen since the early 1990s. Forecast smaller crops for grapes, peaches, and pears are contributing to elevated prices for non-citrus fruits. Lower expected production of some crops in California, as well as several other States, is contributing to the outlook for smaller overall harvests. Drought remains a serious concern among California fruit and tree nut growers, particularly if the lack of water for growing crops lingers through next year’s growing season. Find this chart and additional analysis in Fruit and Tree Nut Outlook: September 2014.