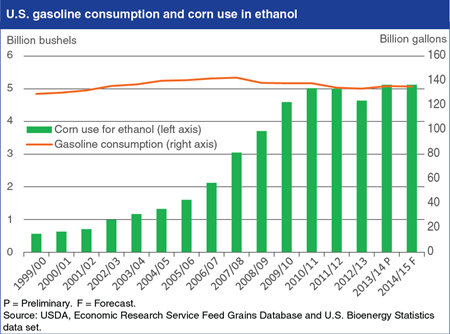 The rapid growth in use of U.S. corn to produce ethanol that occurred during the 2000s has slowed sharply since 2010, and now tracks with U.S. gasoline consumption. Lower U.S. gasoline use since 2007, combined with market constraints to increased blending of biofuel, now limits the demand for corn-based ethanol. Nearly all retail gasoline sold in the United States is a 10-percent ethanol blend (E10). Although ethanol demand now plays a more limited role in driving growth in U.S. corn demand, it continues to account for a large share of total U.S. corn use, averaging 39 percent since 2010. This chart is based on data found in ERS's Feed Grains Database and U.S. Bioenergy Statistics. For more analysis, see Feed Outlook: October 2014.