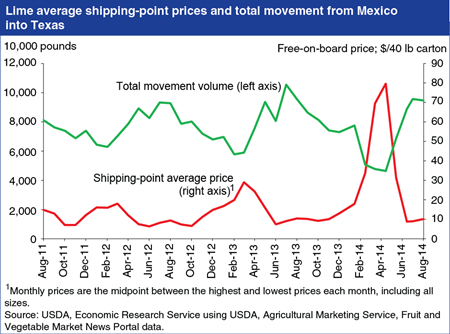 Since disease, pest outbreaks, and severe storm damage led to the decline of U.S. commercial lime production in the early 2000s, nearly all U.S. demand for fresh limes has been met through imports, originating almost exclusively from Mexico. Monthly shipment volumes and U.S. prices of limes generally reflect the seasonal pattern of supplies from Mexico, with lower volumes and higher prices during the winter months. In the spring of 2014, U.S. prices for limes spiked to record levels after heavy rainfall in Veracruz, Mexico in the fall of 2013 that led to a smaller harvest of Persian limes. The average shipping-point f.o.b. (free-on-board) price for Mexican limes peaked at $79.65 per 40-pound carton in April 2014, more than 3 times higher than in April 2013. National average advertised retail prices reported by USDA’s Agricultural Marketing Service (AMS) show that prices climbed to $1.02 per lime in April 2014, over triple the April 2013 price of $0.29 per lime. The price spike subsided by July 2014, as lime shipments increased with the beginning of the spring harvest in April 2014. Although there was speculation that a cartel in the state of Michoacán was behind the sharp rise in prices, that region primarily grows key limes rather than the Persian variety that is exported to the United States. Find this chart and additional analysis in Fruit and Tree Nuts Outlook.