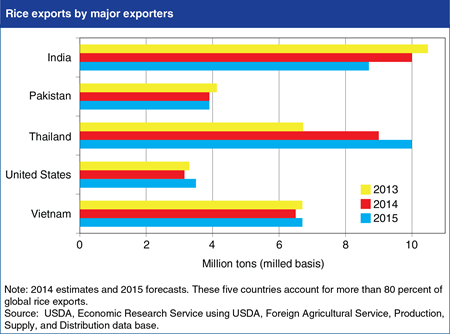 Thailand is forecast to reclaim its position as the largest global exporter of rice in 2015, aided by abundant domestic supplies, competitive prices, and the outlook for record global import demand. Thailand lost its position as the largest rice exporter to India in 2012, after implementation of new price policy—the Paddy Pledging Scheme (PPS)—reduced the price competitiveness of Thai rice and led to the accumulation of government stocks. With the PPS terminated in the spring of 2014, Thai rice exports are forecast to recover to 10 million tons in 2015. India’s rice exports are forecast to slip to 8.7 million tons, because of the outlook for a smaller rice harvest and renewed competition from Thailand. Vietnam and the United States are forecast to have good 2014 harvests and to expand rice exports in 2015. For 2015, world rice output is forecast at a record 477.3 million tons, and exports at a record 41.2 million tons. Sub-Saharan Africa and China are forecast to import record volumes of rice in 2015. Find this chart in the Rice Chart Gallery and additional analysis in Rice Outlook: August 2014.