Farm income is forecast to decline in 2014, but remain above previous 10-year averages 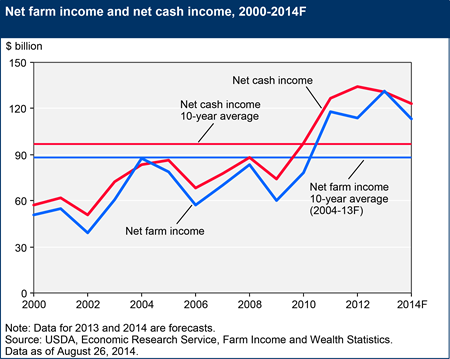 Net farm income is forecast at $113.2 billion in 2014, down about 14 percent from the 2013 forecast of $131.3 billion. If realized, the 2014 forecast would be the fourth-highest value since 1970 after adjusting for inflation. Lower cash receipts for crops, and to a lesser degree, higher production expenses and reduced government farm payments, drive the expected drop in net farm income. Net cash income is forecast at $123 billion, down almost 6 percent from the 2013 forecast. Net cash income is projected to decline less than net farm income primarily because it reflects the sale of more than $10 billion in carryover stocks from 2013. Despite expected record-setting harvests, crop receipts are expected to decrease more than 7 percent in 2014 due to lower prices. Livestock receipts are forecast to increase by more than 15 percent in 2014, largely due to higher prices. This chart is found in the topic page on the 2014 Farm Sector Income Forecast on the ERS website, updated August 26, 2014.