Most U.S. organic exports are fresh fruits and vegetables 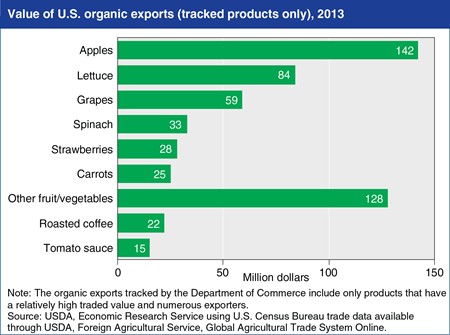 The United States has developed an active organic trade sector in recent years. In 2013, the United States exported organic products to over 80 countries, with Canada and Mexico being the top trade partners. The U.S. Department of Commerce began tracking the trade value of some organic products in 2011, and is expanding the number of organic items tracked. Each new organic product added to the trade code system must meet minimum requirements on product value and the number of importers and exporters. In 2013, the value of tracked U.S. organic exports was $537 million. Fresh fruits/vegetables is still the top organic sector in both production and sales in the United States, and dominates the trade items currently being tracked. Fresh and chilled fruits and vegetables accounted for over 90 percent of the Nation’s total organic export sales in 2013. The top three U.S. organic exports (in value) were apples, lettuce, and grapes. This chart is found in the August 2014 Amber Waves data feature, “U.S. Organic Trade Includes Fresh Produce Exports and Tropical Imports.”