U.S. per person availability of fluid milk down 37 percent since 1970 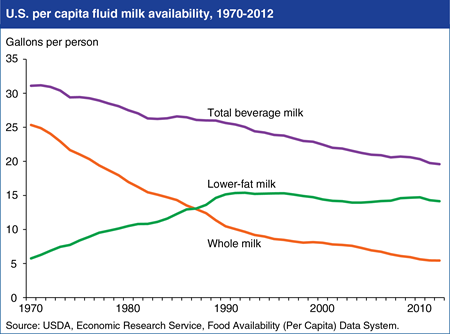 Much of the 63-pound per person drop in the amount of dairy products available to eat or drink in the United States between 1970 and 2012 stems from declining milk consumption by U.S. consumers. Since peaking at 42.3 gallons per person in 1945, fluid milk availability has steadily fallen, reaching a record low of 19.6 gallons per person in 2012. Whole milk availability dropped to 5.4 gallons per person in 2012, almost a quarter of 1970’s 25.3 gallons. In addition, lower-fat milk availability has leveled off to an average of 14 gallons per person since 1998. Competition from other beverages—especially carbonated soft drinks, fruit juices, and bottled water—is likely contributing to declining fluid milk consumption. Substitutes for cow’s milk (including nut milks, coconut milk, and soy milk) have also provided alternatives for consumers. This chart appears in “Trends in U.S. Per Capita Consumption of Dairy Products, 1970-2012” in the June 2014 issue of ERS’s Amber Waves magazine.