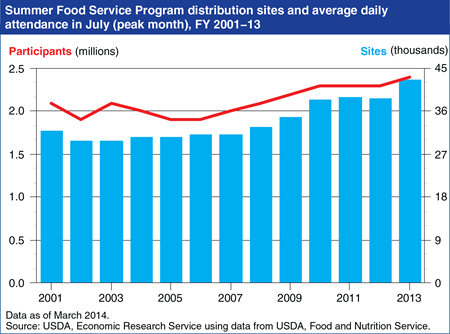 USDA’s Summer Food Service Program provides nutritious meals and snacks to children in low-income areas during the summer months, and during long vacation periods for schools on year-round schedules. USDA reimburses schools, local government agencies, camps, private non-profit organizations, and other sponsors for meals and snacks served to children at eligible sites. The program served 151 million meals and snacks at a cost to USDA of more than $427 million in fiscal 2013. After rising in 2008 and 2009, the number of sites offering summer meals to children remained about the same from 2010 to 2012 but rose from 38,845 in 2012 to 42,654 in 2013. Participation also increased in 2013, with the program serving more than 2.4 million children on an average operating day in July. This chart is from the Child Nutrition Programs: Summer Food Service Program topic page on the ERS website, updated June 23, 2014.