U.S. imports of many fruits and vegetables dominated by few source countries 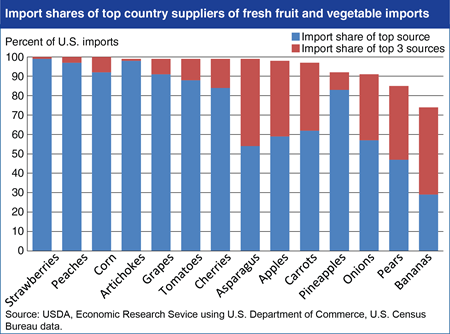 Imported fruits and vegetables account for a growing share of U.S. consumption and in most cases, U.S. imports are sourced from just a few supplying countries. Since 1990, U.S. per capita consumption of fresh fruits and vegetables has held steady, while the share of imports in U.S. fresh fruit consumption has risen from 12 to 34 percent and the import share for vegetables has risen from 10 to 25 percent. Trade has played a role in changing U.S. consumer diets by making produce available outside the traditional U.S. growing season, as well as providing access to a greater variety of produce. Despite the diversity of products available to U.S. consumers, the national sources of these products tend to be relatively concentrated among a few countries, with some variation across commodities. For strawberries, peaches, corn, artichokes, grapes, tomatoes, and cherries, more than 80 percent of imports come from a single country and nearly 100 percent come from just 3 suppliers. Overall, of the 29 imported goods studied by ERS, 18 had a single country supplying more than 80 percent of U.S. imports. Recent ERS research finds that source-country concentration does not appear to be related to U.S. phytosanitary regulations governing fresh fruit and vegetable imports, and may instead arise from market forces such as comparative advantage and specialization. Find more analysis in The Effects of Phytosanitary Regulations on U.S. Imports of Fresh Fruits and Vegetables, released July 2014.