Foods prepared at home are less sodium dense than those from restaurants, but still above guidelines 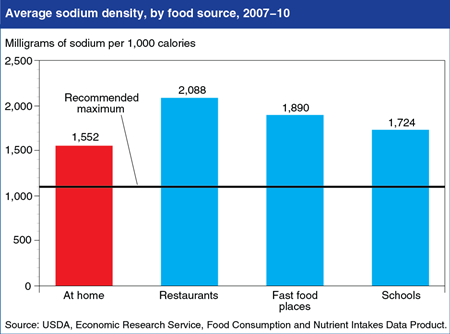 Reducing sodium intake is a key recommendation in the 2010 Dietary Guidelines for Americans. Intake data from the 2007-10 National Health and Nutrition Examination Survey (NHANES) reveal that Americans age 2 and older consumed an average of 1,649 milligrams (mg) of sodium for each 1,000 calories eaten, compared to the recommended maximum of 1,100 mg per 1,000 calories. Foods prepared by restaurants, fast-food places, schools, and other away-from-home sources contain more sodium than foods prepared at home—1,879 mg per 1,000 calories versus 1,552 mg per 1,000 calories. Foods consumed at school cafeterias were found to be less sodium dense than foods eaten at restaurants and fast-food places, but higher than at-home foods. The statistics in this chart are from ERS’s Food Consumption and Nutrient Intakes data product, updated on June 27, 2014.