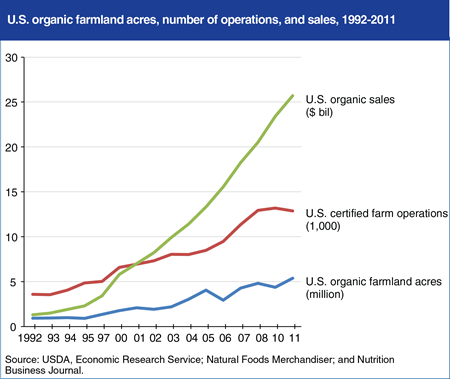 U.S. organic food sales have shown double-digit growth during most years since the 1990s and were estimated to have reached over $34 billion in 2013. According to the Nutrition Business Journal, organic food purchases now account for approximately 4 percent of total at-home U.S. food sales. Certified organic farmland has also expanded, although not as fast as organic sales, as organic production of acreage-extensive feed grains and oilseed crops has lagged growth in other organic sectors. Fresh produce is still the top organic sales category, and California and other States that grow these high-value organic crops have experienced growth in organic acreage since the 1990s. Overall, acreage used for organic agriculture accounted for 0.6 percent of all U.S. farmland in 2011 (0.5 percent of all U.S. pasture and 0.8 percent of all U.S. cropland). Major retailer initiatives to expand the number of organic products they sell could further boost demand. The 2014 Farm Act includes provisions to expand organic research, assist with organic certification costs, and provide other support for U.S. organic producers. This chart is found in “Support for the Organic Sector Expands in the 2014 Farm Act” in the July 2014 Amber Waves online magazine.