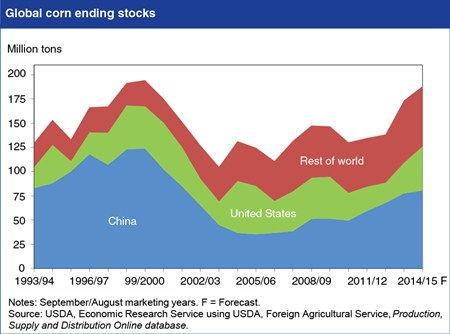 Global corn stocks are forecast to rise to the highest level in 15 years by the end of 2014/15 (September/August), leading to downward pressure on U.S. and global corn prices. Stocks fell to relatively low levels during 2003/04-2006/07, prior to the 2008 spike in world commodity prices, but are now forecast to reach 188.1 million tons in 2014/15, just 3 percent below the recent high of 194.4 million tons in 1999/2000. Since 2008/09, world corn production has exceeded total consumption in 5 out of 7 years. In addition to the United States and China—the two largest global producers and consumers of corn—production and stocks have been generally rising in Brazil, Russia, and Ukraine—countries that are also playing an expanding role as corn exporters. With a second consecutive above trend U.S. corn harvest forecast for 2014/15, the United States is expected to account for most of the 8-percent increase in global corn stocks forecast in 2014/15. With growing inventories, the U.S. season average farm price of corn is expected to decline to $4.00 per bushel, down 10 percent from $4.45 per bushel in 2013/14, and 42 percent from $6.89 per bushel in the U.S. drought year of 2012/13. Find this chart in the Feed Grain Chart Gallery and additional analysis in Feed Outlook: July 2014.