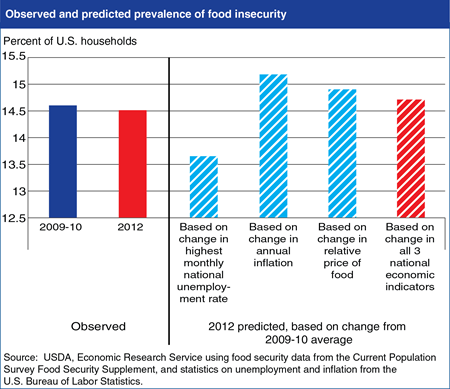 USDA monitors the food security of the Nation’s households—their consistent access to adequate food for active healthy lives—through an annual survey. During the 2007-09 recession, food insecurity increased from 11.1 percent of U.S. households in 2007 to 14.6 percent in 2008, and remained near that level through 2012. Since the end of the recession, unemployment rates have fallen, leading researchers to question why food security has not improved with employment. A recent ERS study of the associations of food insecurity with household characteristics and national economic conditions over 2001-12 estimated that declines in the highest monthly unemployment rate, from 10.0 percent in 2009-10 to 8.3 percent in 2012, would have reduced food insecurity by 0.9 percentage point. However, higher annual inflation and larger increases in food prices relative to other goods and services are estimated to have increased the prevalence of food insecurity by 1.1 percentage points. Most of the year-to-year variation in the national prevalence of household food insecurity was associated with changes in these three national economic indicators. The predicted prevalence of food insecurity in 2012 was 14.7 percent, nearly the same as the observed prevalence of 14.5 percent. The statistics in this chart are from the ERS report, Prevalence of U.S. Food Insecurity Is Related to Changes in Unemployment, Inflation, and the Price of Food, released on June 20, 2014.