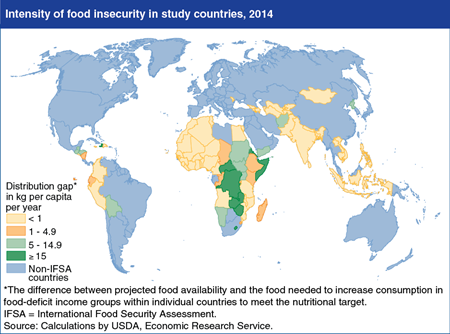 A recent ERS international food security assessment indicates that Sub-Saharan Africa remains the most food-insecure region in the world, although the region shows significant improvement over previous assessments. The share of the population that is food insecure is projected to decline to under 30 percent in 2014, compared with 50 percent or more of the population estimated to be food insecure in the late 1990s. Estimates of the distribution gap—the amount of additional food needed to increase per capita consumption in all income groups to the nutritional target of about 2,100 calories per day—show that the overall gap for the region will decline about 17 percent in 2014. However, the intensity of food insecurity in Sub-Saharan Africa—measured by the distribution gap—is expected to remain high relative to other regions studied. The overall improvement in food security in the region in 2014 is primarily due to the outlook for increased grain production. The ERS assessment also foresees improved food security conditions in 2014 in Asia and the Latin America and Caribbean region, as well as improvements in the generally food-secure conditions in North Africa. Find this chart and additional analysis in International Food Security Assessment, 2014-2024.