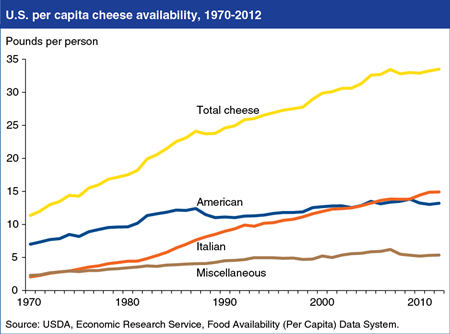 Could your 4th of July burger be topped with mozzarella or provolone this year instead of a slice of American cheese? Over the last four decades, Americans have increased their consumption of cheese, especially Italian varieties such as mozzarella, parmesan, and provolone. In 2012, cheese availability was 33.5 pounds per person, almost triple the amount in 1970 at 11.4 pounds. Availability of Italian cheeses increased to 14.9 pounds per person from 2.1 pounds in 1970. Since 2005, availability of American cheese has remained around 13 pounds per person. Innovative, convenient packaging of shredded cheeses and other cheese offerings and the inclusion of cheese in prepared foods such as frozen pizza and macaroni and cheese have boosted consumption. The popularity of cheese-rich Italian and Tex-Mex cuisines has also contributed to increased cheese consumption. This chart appears in “Trends in U.S. Per Capita Consumption of Dairy Products, 1970-2012” in the June 2014 issue of ERS’s Amber Waves magazine.