Food losses in U.S. homes and eating places larger than in grocery stores 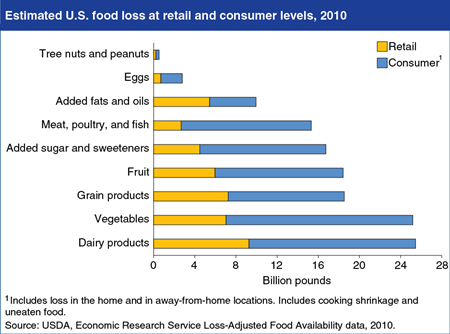 ERS estimates that 31 percent of the 430 billion pounds of food available for consumption at retail and consumer levels in the United States in 2010 went uneaten. The reasons included shrinkage from cooking; losses due to mold, insects, and rodents; and leftovers or spoiled food being thrown out by consumers. Consumer-level food losses include losses in homes and in restaurants, schools, sports stadiums, and other away-from-home eating places. The distribution of food loss between food retailers and the consumer level varies by food group. For example, 83 percent of meat, poultry, and fish losses took place in homes and away-from-home eating places, whereas 45 percent of losses for fats and oils occurred in homes and eating places. Added fats and oils was the only group where a larger portion of loss occurred at the retail level. In quantity terms, dairy products had the largest loss at the retail level, while vegetables had the greatest loss at the consumer level. This chart appears in “Food Loss—Questions About the Amount and Causes Still Remain” in the June 2014 issue of ERS’s Amber Waves magazine.