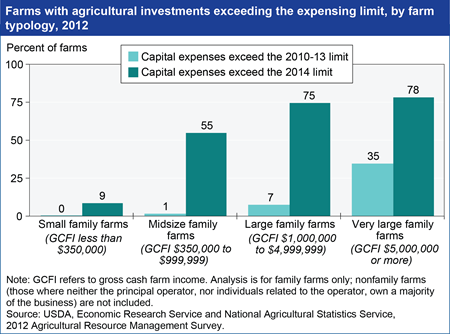 Farming requires large investments in machinery, equipment, and other depreciable capital. Such investments may be treated either as a current expense and deducted from gross farm income immediately, or capitalized and depreciated over time. For the past four years (2010-2013), if the cost was treated as an expense, the maximum deduction a farm could take was $500,000. Unless the 2010-13 expensing limit is extended, it will fall to $25,000 for tax year 2014. This change could increase the cost of capital investment and significantly increase taxable income for some farms. Based on 2012 ARMS data, while 38 percent of U.S. family farms reported a capital purchase, less than 1 percent had expenses exceeding $500,000. Under a $25,000 expensing limit, 13 percent of farms would have exceeded the limit. Smaller family farms, in general, did not make investments exceeding the old limit, but about 9 percent would have exceeded the 2014 limit. Very large family farms (those with gross cash farm income in excess of $5 million) were far more likely to have capital costs exceeding both the old limit (35 percent) and the 2014 limit (78 percent). This chart updates one found in the ERS report, The Potential Impact of Tax Reform on Farm Businesses and Rural Households, EIB-107, February 2013.