Food loss in U.S. grocery stores, restaurants, and homes valued at $162 billion in 2010 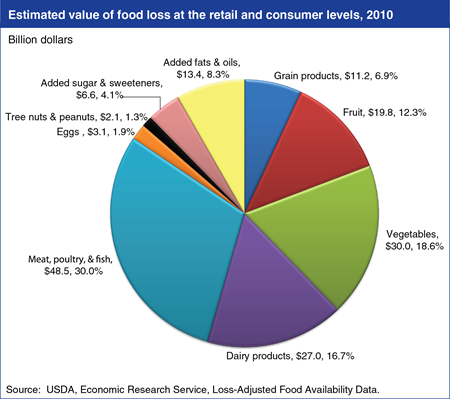 In the United States, 31 percent—or 133 billion pounds—of the 430 billion pounds of the available food supply at the retail and consumer levels in 2010 went uneaten. The estimated value of this food loss was $161.6 billion, using 2010 retail prices. Food loss by retailers, foodservice establishments, and consumers occurs for a variety of reasons—a refrigerator malfunctions and food spoils, a store or restaurant overstocks holiday foods that do not get purchased, or consumers cook more than they need and choose to throw the extra food away. Food loss also includes cooking loss and natural shrinkage, such as when leafy greens wilt. In 2010, the top three food groups in terms of share of total value of food loss were meat, poultry, and fish ($48 billion); vegetables ($30 billion); and dairy products ($27 billion). Meat, poultry, and fish’s 30-percent share in value terms is higher than its 12-percent share when measured on a weight basis due to these foods’ higher per pound cost relative to many other foods. This chart can be found in The Estimated Amount, Value, and Calories of Postharvest Food Losses at the Retail and Consumer Levels in the United States, released February 20, 2014.