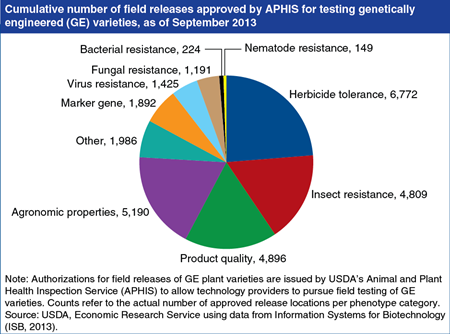 The successful commercialization of GE varieties culminates earlier research and development (R&D) efforts in agricultural biotechnology. One measure of previous and ongoing R&D activity is the number of field releases for testing of GE varieties approved by USDA’s Animal and Plant Health Inspection Service (APHIS). As of September 2013, about 7,800 releases were approved for GE corn, more than 2,200 for GE soybeans, more than 1,100 for GE cotton, and about 900 for GE potatoes. Field releases were approved for GE varieties with herbicide tolerance, insect resistance, product quality such as flavor or nutrition, agronomic properties like drought resistance, and virus/fungal resistance. After successful field testing, deregulation allows seed companies to commercialize the seeds that they have developed. As of September 2013, APHIS had received 145 petitions for deregulation and had approved 96 petitions after having determined that the organism (i.e., the GE plant) is unlikely to pose a plant pest risk. In addition to corn, cotton, and soybeans, APHIS has approved petitions for deregulation for GE varieties of tomatoes, rapeseed/canola, potatoes, sugarbeets, papaya, rice, squash, alfalfa, plum, rose, tobacco, flax, and chicory. This chart is found in “Adoption of Genetically Engineered Crops by U.S. Farmers Has Increased Steadily for Over 15 Years” in the March 2014 edition of Amber Waves online magazine.