Global rice trade is projected to reach record high in 2014 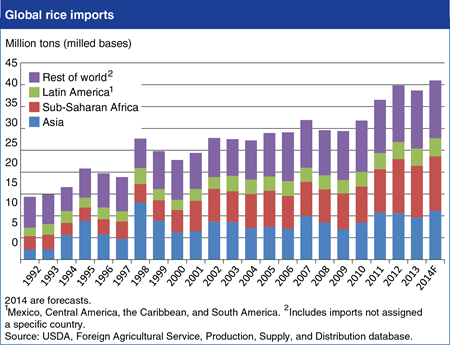 Total calendar year 2014 global rice trade is forecast at a record 41.0 million tons, up 2.3 million tons, or nearly 6 percent, from 2013 and continuing the trend of expansion that began in 2010. The increase of rice trade has been driven by the combination of increasing demand by markets in Africa, the Middle East, and Asia, and abundant exportable supplies with Asian exporters. In 2014, China is forecast to be the world’s largest rice importer, followed by Nigeria, Iran, Indonesia, Iraq, and the Philippines. India is forecast to again be the largest rice exporter, followed by Thailand, Vietnam, Pakistan, and the United States. World rice prices, while remaining somewhat volatile since the 2008 spike in global food prices, have remained well below those that occurred in 2008 and have generally supported the growth in world rice trade. Find this chart in the Rice Chart Gallery and more analysis in Rice Outlook: March 2014.