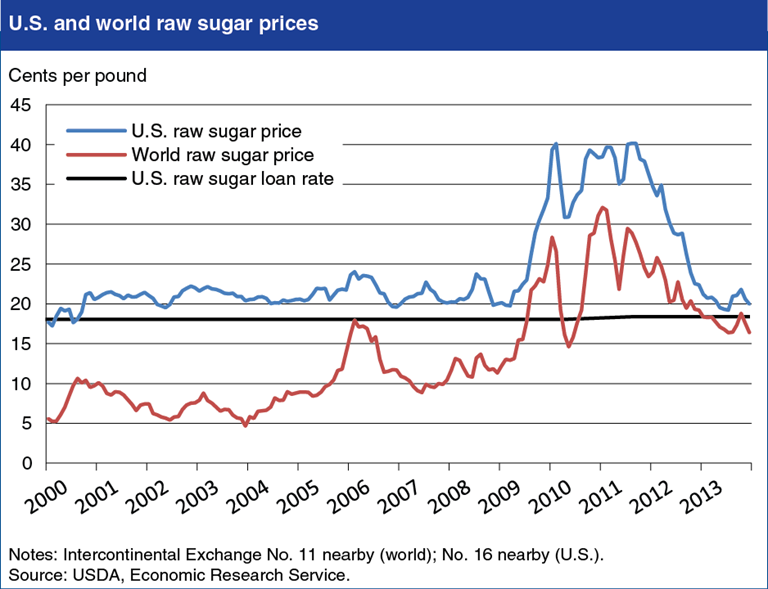 Since 2007/08 (October/September marketing year), U.S. raw sugar prices have become more closely linked to world prices, with important implications for U.S. sugar policy. During 2000-2007, U.S. and world raw sugar prices were largely unrelated with a correlation coefficient of just .0516, but during 2008-2013, the correlation increased to .862. A key factor behind the increased correlation between U.S. and world raw sugar prices is that since 2008, world prices have increased and generally trended well above the U.S. loan rate—the price at which sugar producer prices are supported in the domestic market. With the world price, rather than the loan rate, supporting U.S. prices, U.S. raw sugar prices have moved up and generally remained above the loan rate, a shift that has also reduced the need for USDA to support producers by purchasing excess sugar for resale to ethanol producers, as required by Farm Act legislation. A second factor has been the increase in U.S. sugar imports from Mexico following implementation of the North American Free Trade Agreement. Mexican exports to the United States are competitive with those of other U.S. suppliers, helping to increase the correlation between U.S. and world prices, even when world prices fall below the sugar loan rate. Find this chart and additional analysis in Sugar and Sweeteners Outlook: February 2014.