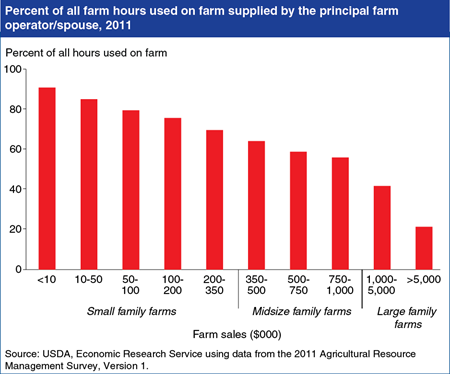 The United Nations (UN) has designated 2014 the “International Year of Family Farming” with a primary focus on small farms that depend on a family for most labor. While farms in the United States are often much larger than the farms in developing countries that are the primary focus of the UN’s efforts, most U.S. farms are family businesses that rely primarily on family labor. Large U.S. family farms are more likely to rely on partners and on hired and contract labor than smaller farms, so the share of labor provided by the principal operator and spouse falls as farms get larger. On average, a farm’s principal operator and spouse contribute more than 50 percent of the farm’s labor until farm sales reach $1 million or more. That share is an average of 42 percent for farms with $1-$5 million in sales, and falls to 21 percent among farms with $5 million or more in sales. Farms reliant primarily on the labor of the operator and spouse account for nearly half of U.S. farm production. This chart can be found in “Family Farming in the United States” in the March 2014 Amber Waves.