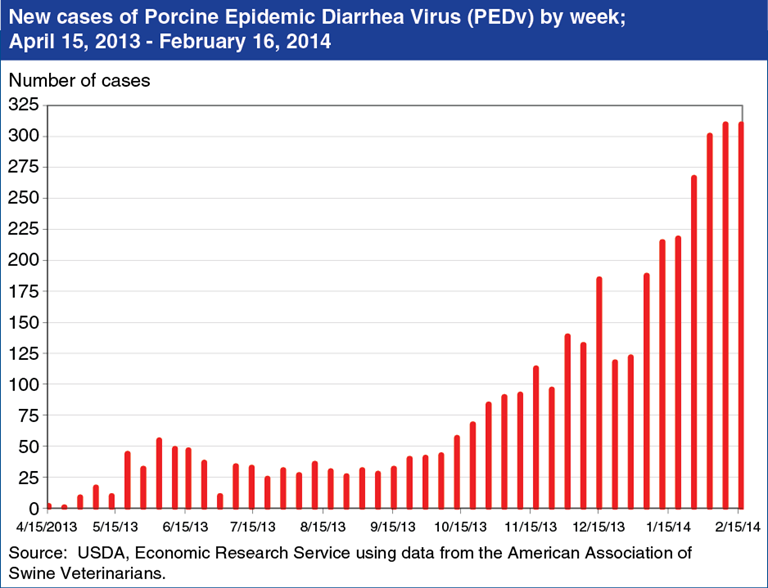 In recent weeks there is evidence indicating acceleration in the rate of Porcine Epidemic Diarrhea Virus (PEDv) cases in the U.S. swine herd, currently leading to modest impacts on USDA forecasts of 2014 U.S. pork production. The presence of PEDv was confirmed in the United States on May 17, 2013. While animals older than 7 days typically recover from the virus, mortality rates for pre-weaned piglets are often 100 percent. There is no effective vaccination to protect animals from the virus. PEDv spreads via the fecal-oral route and via contaminated footwear, clothing, farm supplies, and vehicles. The disease is only infectious to swine, and as such there are no associated food safety concerns. The available data likely understates the incidence of the disease because not every outbreak site is sampled and tested for PEDv, and because PEDv is not a disease that the World Organization of Animal Health (OIE) or USDA requires to be reported. Due to the continued spread of the disease and the likely losses of young animals, in February USDA made a 0.7 percent reduction in the forecast of 2014 pork production. Production losses from PEDv-related animal deaths in 2014 are expected to be partially offset by continued increases in slaughter weights. Find this chart and additional analysis is Livestock, Dairy, and Poultry Outlook: February 2014.