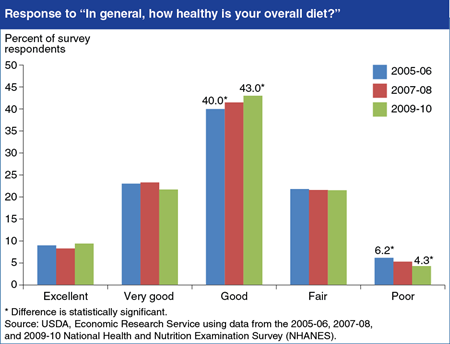 Some Americans believe they are making better food choices than they did in earlier years. In response to the question, “In general, how healthy is your overall diet?” 43 percent of respondents in the 2009-10 National Health and Nutrition Examination Survey (NHANES) rated their diets as “good,” compared to 40 percent 4 years earlier. During the same 4-year period, the number of people reporting a “poor” diet fell by 1.9 percentage points, from 6.2 to 4.3 percent. In the last three NHANES surveys, the most common response was “good,” followed by “very good” and “fair,” and the least common responses were at the extremes—“excellent” and “poor.” The proportion of respondents answering “excellent,” “very good,” or “fair” were statistically the same across the three surveys. This chart appears on ERS’s recently updated webpage about the Flexible Consumer Behavior Survey, which is a subset of questions in NHANES that collects information on the food habits, attitudes, and dietary behaviors of U.S. consumers.