One-third of calories in the U.S. food supply go uneaten 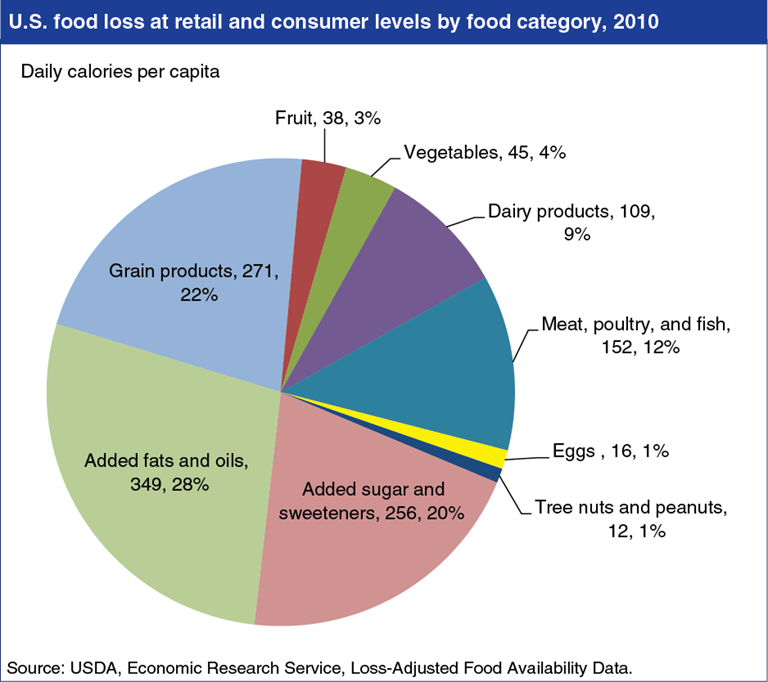 Food loss represents the amount of postharvest food that is available for human consumption but not eaten, for reasons ranging from spoilage and pest infestation to cooking shrinkage and plate waste. A portion of this loss is food waste—edible food that goes uneaten. Food waste is becoming increasingly important as the world’s population grows and pressures on agricultural land and other resources increase. ERS estimates that 31 percent, or 133 billion pounds, of the 430 billion pounds of the available U.S. food supply was lost from human consumption in 2010 at the retail and consumer levels. This translates into a loss of 1,249 calories per American per day. Close to three-quarters of this calorie loss came from three of the nine major food groups—added fats and oils, grain products, and added sugars and sweeteners, partly reflecting the high caloric density of these foods relative to other food groups. The statistics for this chart can be found in the ERS report, The Estimated Amount, Value, and Calories of Postharvest Food Losses at the Retail and Consumer Levels in the United States, released February 20, 2014.