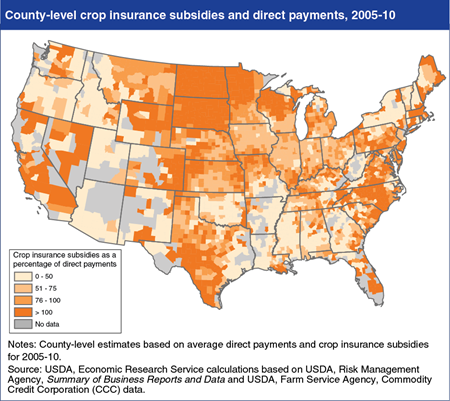 Under environmental compliance, U.S. farmers who crop highly erodible land without applying an approved soil conservation system or who drain wetlands risk losing all or part of many Federal agricultural payments. The Agricultural Act of 2014 makes several changes which, on balance, continue to provide compliance incentives. Direct payments, which were paid to farmers regardless of economic conditions, were eliminated, but the act makes crop insurance premium subsidies subject to compliance, along with other continuing or new conservation and commodity programs. In some areas (those where the ratio of average insurance subsidies to direct payments for 2005-2010 exceeds 100 percent), the loss of direct payments will be more than offset by making crop insurance premium subsidies subject to compliance. In other areas, where direct payments were large relative to premium subsidies, compliance incentives will depend more heavily on new commodity programs. This map is found in the ERS report, The Future of Environmental Compliance Incentives in U.S. Agriculture, EIB-94, March 2012.