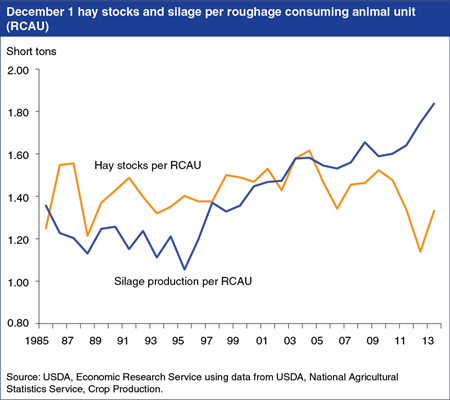 U.S. livestock producers were faced with reduced supplies of hay and silage (fermented, high-moisture stored animal feed which can be fed to cattle or sheep) following the 2012 drought, but recent USDA estimates indicate a rebound in supplies during 2013. Estimates of hay stocks and silage production per roughage consuming animal unit (RCAU) provide a means of comparing supplies to the size of the livestock herd while accounting for the varying roughage consumption of different animal types. All hay production for 2013 is estimated at 135.9 million tons, a 13-percent increase from the drought-affected total in 2012. As a result, hay stocks per RCAU rebounded in 2013, but remain below the recent 10-year average (2003-12) of 1.44 short tons per RCAU. U.S. corn and sorghum silage production is estimated at 123.3 million tons in 2013, up 4.8 percent from 2012 and the highest since 1982. With higher production, silage available per RCAU is 1.84 tons per unit, up from 1.75 tons per unit in 2012. Increased availability of roughage via hay and silage sources provided additional options to livestock producers facing tightening grain supplies during the summer and early fall of 2013. The December all hay price of $168 per ton is 11 percent lower than the comparable 2012 price of $189, but well above the 10-year average (2003-12) of $121 per ton. This chart can be found in the Feed Grain Chart Gallery, with accompanying analysis in Feed Outlook: January 2014.