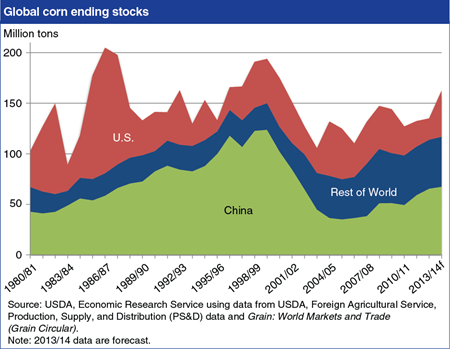 Despite higher December forecasts for U.S. corn use for feed and ethanol, USDA continues to forecast significantly higher U.S. and global corn stocks and lower prices for corn in 2013/14 (September/August marketing year). Total U.S. corn production is forecast at 355.3 million tons, up 30 percent from the drought-damaged 2012/13 crop, while total use is forecast to rise 12 percent from 2012/13. Key sources of demand growth for corn in 2013/14 are a 20 percent increase in feed and residual use, and a 6 percent increase in the use of corn for ethanol production. Lower corn prices combined with relatively high prices for ethanol and distillers dried grains (DDG) have boosted ethanol production. Even with increased use, U.S. ending stocks of corn are forecast at 45.5 million tons, more than twice the estimate of U.S. ending stocks for 2012/13 and accounting for nearly all the forecast rise in global stocks. The U.S. corn price received by farmers for 2013/14 is forecast at $4.05 to $4.75 per bushel, with the midpoint forecast of $4.40/bushel down sharply from the record season-average price of $6.89 per bushel in 2012/13. This chart can be found in the Feed Grain Chart Gallery, with accompanying analysis in Feed Outlook: December 2013.