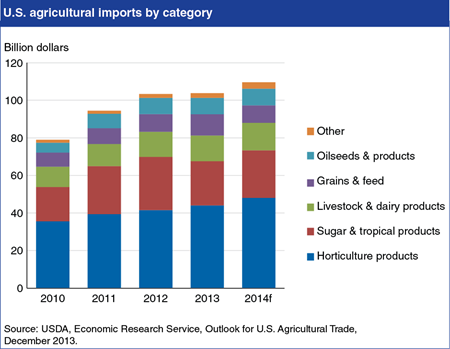 U.S. agricultural imports are forecast at a record $109.5 billion in fiscal year 2014 (October/September), up $5.7 billion from fiscal 2013, with horticultural products continuing to be the primary driver of import growth. The outlook is for relatively stable prices for major imports in fiscal 2014, while stronger U.S. income growth is expected to boost import volumes. Imports of horticultural products are projected to increase by $4 billion in fiscal 2014 as U.S. demand for fresh fruits and vegetables, processed fruit, wine, essential oils, and most other horticultural product categories continues to expand. Horticultural products have accounted for more than 40 percent of U.S. import growth since 2010. Imports from most supplying countries are expected to be higher in fiscal 2014 with Canada, Mexico, and the European Union—which together account for more than 59 percent of U.S. imports—contributing most of the gains. This chart is based on data provided in the Outlook for U.S Agricultural Trade.