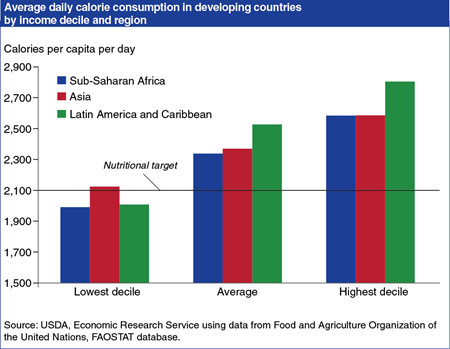 Average regional calorie consumption levels were above the nutritional target of 2,100 calories per person per day in 2009 (most recent data available), but the lowest income groups in Sub Saharan Africa (SSA) and Latin America and the Caribbean (LAC) did not meet this target. The LAC region was found to be more food secure than SSA and Asia at national average and higher income levels, but because income distribution is more unequal in this region, consumption levels of the lowest income groups were below those in Asia and roughly equivalent to those in SSA. Regional averages also mask large disparities in consumption across countries, with some countries in each region having average per capita calorie consumption below the nutritional target. Of the developing regions assessed, only North Africa had calorie consumption above the nutritional target in all countries and in all income groups. This chart can be found in the Amber Waves feature, "Despite Improvements in International Food Security, Nutritional Adequacy of Diets Fall Short of Targets in Many Countries."