What is "very low food security"? 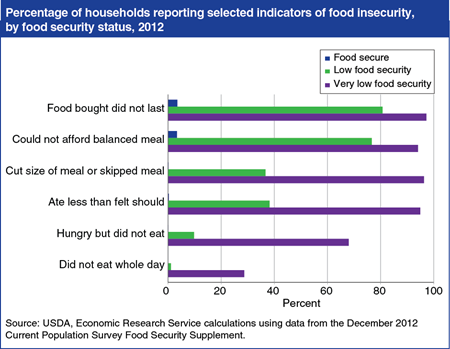 Household food security statistics published annually by ERS are based on responses to survey questions about conditions and behaviors that characterize households when they are having difficulty meeting basic food needs. In households classified as having “very low food security,” the food intake of household members was reduced and their normal eating patterns were disrupted at times during the year because the household lacked money and other resources for food. In 2012, the 7 million households with very low food security reported the following specific conditions (along with other conditions): 96 percent reported that they had cut the size of meals or skipped meals because there was not enough money for food, 95 percent reported that they had eaten less than they felt they should because there was not enough money for food, and 68 percent reported that they had been hungry but did not eat because they could not afford enough food. This chart is drawn from a chart that appears in Household Food Security in the United States in 2012, ERR-155.