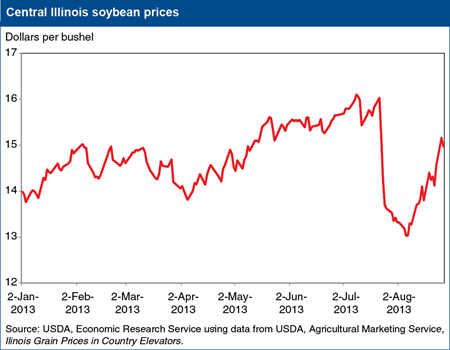 Last month, U.S. cash prices for soybeans fell under the pressure of a new-crop outlook that is much improved over last year, combined with prospects for increased competition in export markets for soybeans and products because of abundant unused stocks in South America. The market’s transition also encouraged farmers to sell more of their last few stocks of old-crop soybeans, which added to the downward price momentum. In early July, cash prices at central Illinois country elevators were near $16 per bushel but were just over $13 by early August. But prices have now rebounded since USDA’s August 12 crop production report, which included a soybean yield forecast that was below market expectations. At $10.35-$12.35 per bushel, USDA’s forecast range for the 2013/14 average farm price is well below this year’s average of $14.40 per bushel. Cash prices for soybean meal and soybean oil are also lower. From its mid-July peak, central Illinois soybean meal prices dropped about $150 per short ton by early August to around $425 per short ton. Likewise, soybean oil prices in early July were close to 47 cents per pound but currently hover just over 41 cents per pound. This chart appears in the Oil Crops Chart Gallery.