U.S. farms have become more specialized over the last 100 years 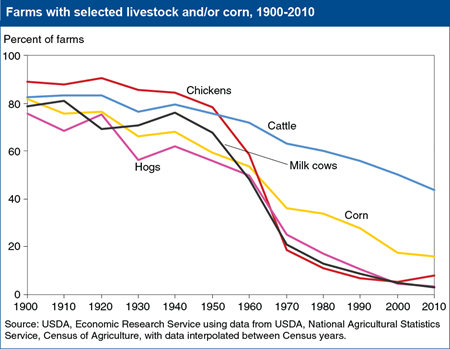 Most U.S. farms raised multiple species of livestock as late as 1960. As a result, most farms also raised corn to feed their animals. Since then, livestock production has become much more specialized, so that less than 5 percent of farms had chickens, hogs, or milk cows by 2010, and those purchase much of their feed. Many farms still raise beef cattle, usually in small cow-calf operations that require land for pasture but only modest labor commitments. Far fewer farms now grow corn, since they do not have herds of livestock, and corn production has concentrated on larger crop operations that grow corn along with 1 or 2 other crops, like soybeans, wheat, or alfalfa. This chart is found in the ERS report, Farm Size and the Organization of U.S. Crop Farming ERR-152, August 2013.