Drought and heat in 2012 lowered U.S. corn yields by more than 40 bushels per acre 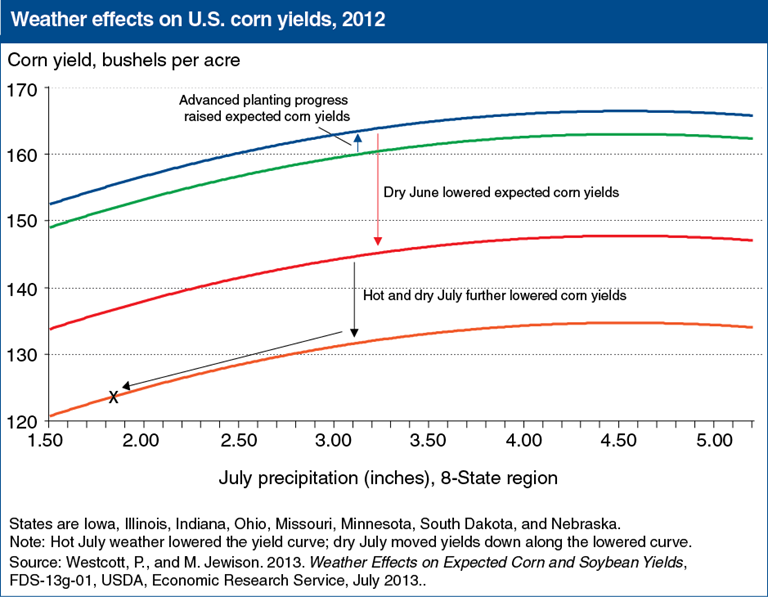 The most severe and extensive drought in at least 25 years combined with high temperatures to seriously affect U.S. agriculture in 2012. Corn yields were the lowest since 1995, and the chart illustrates the impacts of drought and hot weather on 2012 corn yields. The 2012 season actually got off to a good start, with good weather initially permitting early planting of the corn crop, a typically beneficial factor that increased initial yield expectations for the crop. But then poor weather during the growing season hindered yields. An extremely dry June is estimated to have lowered 2012 corn yields by close to 19 bushels per acre. Hot and dry July weather further reduced yields an estimated 22-23 bushels per acre. This yield reduction breaks into two parts. First, the reduction due to high temperatures shifts the yield curve down 13 bushels per acre. Dry weather in July 2012 was the primary cause of the rest of the reduction in corn yields (to 123.4 bushels per acre), represented by the indicated movement downward along the lowered yield curve. This chart appears in Weather Effects on Expected Corn and Soybean Yields, FDS 13g 01, July 2013.