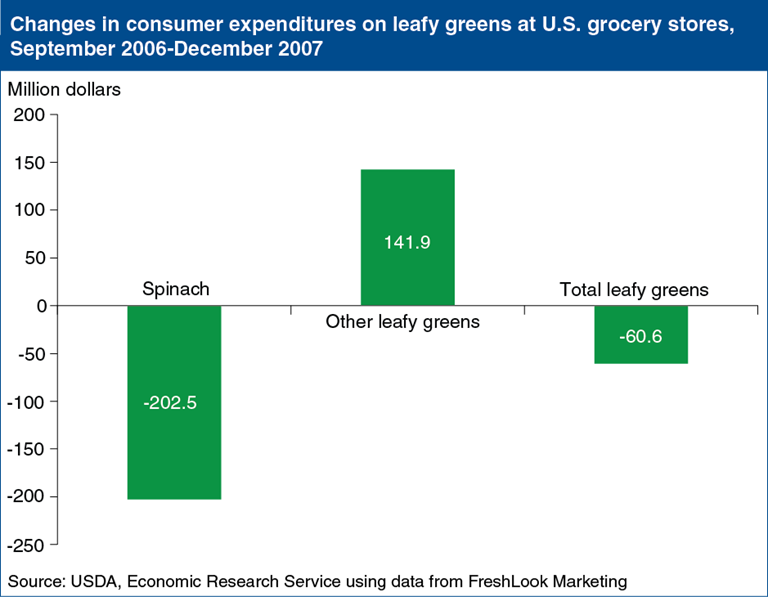 In January 2011, Congress passed the Food Safety Modernization Act, which included a set of mandatory food safety practices for U.S. produce growers. Produce imports would need to provide the same level of public health protection. The new regulations, designed to reduce the risk of foodborne illnesses, followed several major foodborne illness outbreaks traced to produce. In 2006, an outbreak traced to spinach contaminated with E. coli O157:H7 resulted in over 300 illnesses and 3 deaths. For about 2 weeks, most of the spinach in the United States was off the market following Government warnings not to eat bagged or fresh spinach. But even after the warnings were lifted, consumers were slow to return to their previous spinach purchases. ERS researchers analyzed retail scanner data and found that lost consumer expenditures at U.S. grocery stores totaled $60.6 million for all fresh leafy greens (spinach and lettuces) between the September 2006 outbreak and December 2007. Spinach sales fell by $202.5 million, while sales of lettuce grew by $141.9 million as some consumers switched from spinach to other leafy greens that were not implicated in the outbreak. The data for this chart appeared in "Consumers' Response to the 2006 Foodborne Illness Outbreak Linked to Spinach" in ERS’s Amber Waves, March 2010.