U.S. agricultural exports and imports forecast to continue to rise 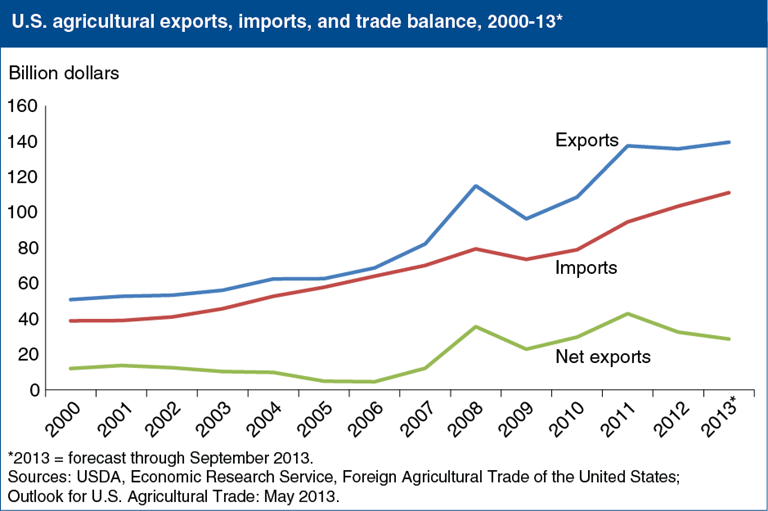 U.S. fiscal 2013 (October 2012/September 2013) agricultural exports are forecast at a record $139.5 billion, $3.7 billion above fiscal 2012 exports and $2.1 above the fiscal 2011 record. U.S. agricultural imports are forecast at a record of $111 billion in fiscal 2013, $7.6 billion above the previous record in fiscal 2012. Stronger global gross domestic product (GDP) growth and robust demand in China and developing countries in Asia, Latin America, and North Africa are expected boost export demand for U.S. products, offsetting the effects of a stronger U.S. dollar. The 8-percent increase in U.S. agricultural imports forecast for fiscal 2013 is driven by a combination of a relatively strong 3.2-percent increase in personal disposable incomes in the year through March, combined with the strengthening of the U.S. dollar. U.S. agricultural import growth is forecast to be broadbased, with relatively large increases forecast in major import categories, including fresh and processed fruits and vegetables, and livestock and meat products. This chart is based on data provided in Outlook for U.S. Agricultural Trade: May 2013.