Sub-Saharan Africa has the highest percentage of food-insecure people 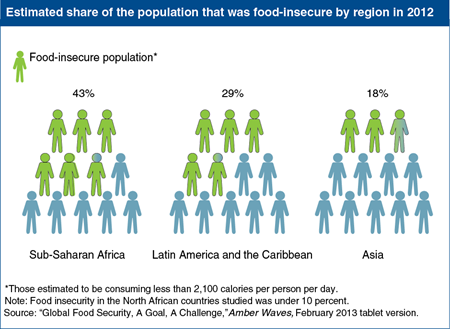 Sub-Saharan Africa continues to be the region with the largest share of food insecure people according to estimates for 2012 based on the USDA-ERS International Food Security Assessment model. The model projects food availability and access in 76 lower income countries in 4 regions: Sub-Saharan Africa, Asia, Latin America and the Caribbean, and North Africa. A person is considered food insecure if estimated consumption levels are below an average 2,100 calories per capita per day. Strong economic growth in recent years has contributed to improvements in food security across the globe, but food insecurity in Sub-Saharan Africa remains at relatively high levels, followed by the Latin America and Caribbean region and Asia. Food insecurity in North Africa was estimated at below 10 percent. This chart is based on estimates in International Food Security Assessment, 2012-22 (GFA-23) and appears in the February 2013 issue of ERS's Amber Waves tablet version.