India is playing an expanding role in global rice-export markets 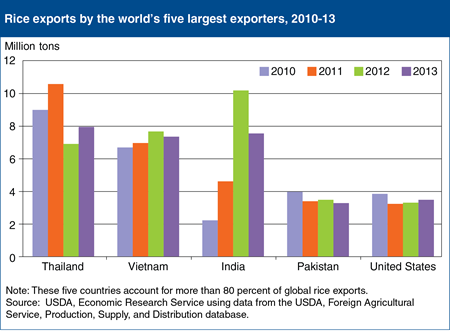 India exported a record 10.3 million tons of rice in 2012, making that country the world’s largest exporter for the first time. India’s rice exports increased from 2010 to 2012 because of generally good harvests, the accumulation of record Government stocks, globally competitive prices, and the relaxation of export restrictions. In September 2011, India removed restrictions on exports of non-basmati rice. The restrictions had been put in place during the 2008 global price spike to insulate Indian consumers from higher world prices. Vietnam, typically the world’s second largest exporter, shipped a record 7.7 million tons in 2012, also due to a bumper crop and competitive prices. In 2013, both India and Vietnam are projected to reduce their rice shipments as exports from Thailand, typically the world’s largest exporter, show some recovery. Thailand’s exports dropped to 6.9 million tons in 2012, when that country’s new Paddy Pledging Scheme, initiated in 2011/12, led to government purchases at above-market prices and the accumulation of about 16 million tons of stocks by early 2013. This year, the Thai Government is expected to release some of this rice, allowing Thailand to again become the world’s No. 1 exporter. This chart is adapted from the Rice Chart Gallery published with Rice Outlook: March 2013, RCS-13c.